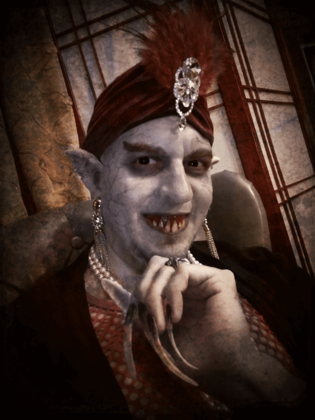 In sashays a sinewy thing that makes no effort to conceal the curse of its Nosferatu blood. The head is crowned by a wine-colored turban pinned with a gaudy rhinestone brooch that contrasts horribly with a venous countenance mottled with powder and rouge. Its eyes are the color of an oil spill, and you imagine that the two caterpillar-like clusters of hair upon its brow must be trying to escape. Further down the face a row of jagged, discolored teeth protrudes boldly from misshapen, painted lips. From the lobes of starkly pointed ears dangle pendulous tassels, and a string of pearls adorns the shriveled, birdlike neck. Over a tasteless red mesh top hangs a moth-eaten coat of lank fur that has been stained with various nauseating hues. Scabrous hands with long, twisted nails jut out from the shabby sleeves to terminate in knobby, fungal fingers crowded with a variety of clashing rings. The ensemble is a sartorial crime, made all the more offensive by the brazenness with which it is worn. Why? Why will this creature not do what is merciful, and hide itself from sight? 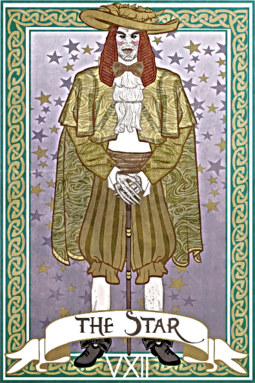 Pre-1421: Depending on the day, Vancura's stories of his mortal life include being the heir of dispossessed nobility who were forced to flee their homeland, being the child of long-suffering peasant laborers who were worked to death, being a street urchin forced to act, sing, and do other questionable things, and being the son of a merchant sailor who was essentially raised on the sea. The only constant in these stories is that he is of Hungarian descent.

1421: The vampire Vancura is formally released in Munich as the progeny of Dieter von Chiemsee, a monkish and retiring Nosferatu. He shows none of his sire's wisdom or modesty and thumbs his nose at the expectation that a proper Nosferatu is rarely seen and only speaks words of worth. His affectation of courtly mannerisms and his fondness for pageantry earn him unflattering comparisons to the Toreador. Moreover, he refuses to to dwell underground with his new "family," instead preferring to take up residence in the city's brothel.

1429: Vancura's pathological need for attention has him attiring himself in ever gaudier displays of purloined finery, towering wigs, and make-up. ("The eye, against all desire, is drawn to him as to a blister on the lips of the Madonna" noted one Harpy at the time.) He is eventually invited to a Toreador salon in Nice just so that the guest of honor, Cassandra Apollo, can savagely mock him; however, to the guests' collective dismay he flips the script and succeeds in charming her with his dancing skills, flattery, wit, and sincere passion for the dramatic arts. The Lady from Delphi is sympathetic to his desire for visibility, and thereafter he finds himself invited to more salons in earnest.

1430 ~ 1450: Seeming never to settle in one place for very long, Vancura widens his circle of associates by attending gatherings in several cities including Brussels, London, Paris, Berlin, Genoa, Amsterdam, Prague, Barcelona, Copenhagen, and elsewhere. His ability to gather information earns him some grudging respect from his fellow Nosferatu, even if they continue to fault his flamboyant style. His ease at infiltrating and navigating both high and low mortal society allows him to work various favors that other kindred find useful. At salons, he begins to discuss outlandish aesthetic notions that he later formalizes into a "philosophy" he calls beaute radical, which asserts that beauty is a function of one's will, independent from the perceptions or judgments of others.

1450 ~ 1750: Vancura is a known associate of Grifo Léon Pippin Martel, who is later recognized as an Architect of the Camarilla, so it is no surprise when he later joins the nascent sect. Over the next several decades his appearances at salons and other social functions become less regular, punctuated by absences lasting for months or even years as he goes on extended spontaneous "holidays." Toward the middle of the 18th century, he is believed lost after a ship carrying him to the New World sinks off the coast of Virginia during a storm, and as the news spreads those kindred who have appointed themselves the gatekeepers of good taste breathe a collective sigh of relief.

1977 ~ present:Vancura presents himself in Richmond "fashionably late" and decides to settle there. When the Toreador Harpy Fiona Bizet is appointed Seneschal, he gladly steps in to fill the vacancy. Rather than submit written reports in writing, he physically distributes his thoughts on micro-cassettes questionably called Nocturnal Emissions. He lays claim to an a seedy, dilapidated theater called La Petite Mort in which he periodically hosts parties, and he often announces symbels by theme to encourage getting into the spirit of things.

THE REVIEWS ARE IN!

WITH SPECIAL THANKS TO

OUT OF CHARACTER STUFF