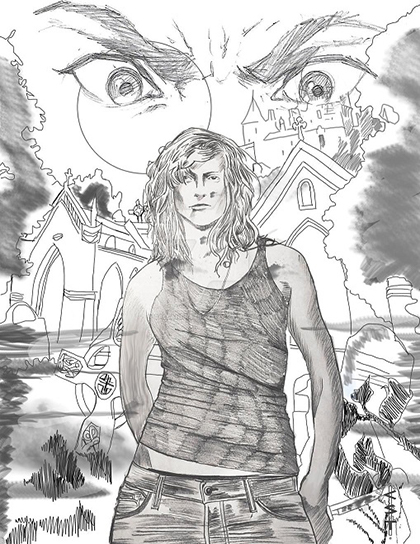 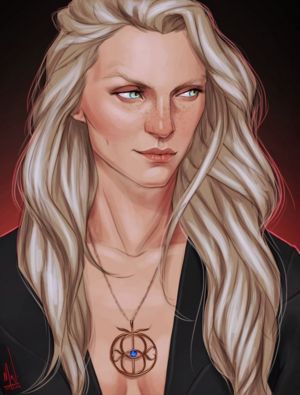 340 CE - Embraced, the same year Constantine became the sole emperor of the Roman Empire, near the beginning of the Golden Age of Vampiric Society in Constantinople.

From 340 - 475 ish, Babatha is in Constantinople at her sire’s side. He tutors her extensively in Cainite history (some would call it mythology). He is the one who teaches her about the Paths of Enlightenment, and how you cannot conflate the Path of Humanity with being human. To follow the Path of Humanity is not to cling to one’s human or mortal self, but rather to establish a morality which can withstand the ravages of time and the Beast, and unite Cainites in a common purpose of the soul independent of any particular faith (or lack thereof). He teaches of Malkav, Arikel, of Caine and Enoch and Nod and the First and Second Cities. He awakens her Oracular ability and teaches her to see the unseen and not to be afraid of the Insight and to see The Strand of Fate and to revel in the Network.

475 - 1300 - Babatha is considered to be responsible for herself and no longer accountable to her sire, and she sets out to explore the known world, though she returns frequently to her “home” in Constantinople. She is witness to many great events in history: the birth of Islam, the rise of the Catholic Church, the Crusades, along with the ever-shifting mortal kingdoms and allegiances. Babatha begins to see connections between faith, ideology, monarchy, oppression, and the inevitability of corruption. She steeps herself in Cainite politics, making friends and acquaintances far and wide as she makes many, many prophetic utterances, most notably:

~ 1300 - Babatha’s sire falls to the Inquisition. Devastated by the loss of her sire and wishing to put distance between herself and her home, she abandons her sire’s havens and holdings and moves to Europe.

1300 - 1400 - Babatha works to establish herself in Europe. She begins to make the first of many utterances regarding “the long shadow of a white tower” and “all whom this shadow touches shall find their mind full of darkness”.

1346 - Babatha is present at the Great Prank. Her oracular commentary on the Prank is “Some things should not be Denied.” When asked for details, she says all she can see is “Nothing" but assures her clan that "Nothing lasts forever." She is a voice of reason and calm and her clan copes with their tragic loss.

1400 - 1486 - As the Camarilla grows from shadow coterie to sect, Babatha begins her personal political crusade to keep Clan Malkavian from joining. She also begins to publicly denounce the budding sect to every pro-Camarilla Cainite she meets with the pronouncement “You are inviting your Doom in through the front door.” She pleads with Camilla Banes to remove the Clan from consideration and throw their support behind the Tremere instead. It doesn’t work.

1493 - Babatha attends the Convention of Thorns. She tells the Gangrel: “Come the Revelation, you’ll be first.” Babatha and Pythia have a serious conversation about Clan Malkavian’s entry into the Camarilla. Babatha also pleads her case to Toreador Elijah Smith, and others present (any who will listen). They are not persuaded by her visions. After the Sack of Silchester, Babatha assists with wiping the minds of mortals, but she observes of the rising Sabbat that “You didn’t need to be an oracle to see this one coming.” She has a long talk with Vasantasena. She is seen leaving Silchester with The Forest of Teeth

1500- 1650s - Babatha withdraws from formal vampiric society amidst the violence brought by the rise of the Sabbat, the expanding influence of the Camarilla and its hostility toward Autarks. She makes allies among the Anarchs and the Sabbat, especially among the Sabbat antitribu of her clan, and among the Independent Clans. She travels, and spends a great deal of time sharing knowledge and conversation with other Cainites. She plays 2 games of chess with Grifo Léon Pippin Martel

1600 - 1650 - Babatha falls in with Sevinch. The two hide out in Europe from the growing sectarian threats and provide mutual aid and support to each other for five decades before they part ways.

1650s - Babatha decides to head to the new world, and claim territory in advance of the Camarilla. She catches a ride to the Massachusetts Bay Colony and claims personal domain over the fishing village of Gloucester, believing her presence will be easier to conceal there, as opposed to the large, busy port of Salem.

1650 - 1800 - Babatha establishes cautious boundaries with native supernaturals and they avoid each other. Cainites begin arriving, and sectarian violence follows in their wake. She continues to have oracular visions but keeps them to herself.

1812 - Knowing sectarian violence is a threat to everyone, Babatha sides with the Camarilla in the war of the Easter Seaboard, for a price. She adopts the moniker “Bob” at this time.

1812 - 1900 - Bob continues to serve as a back door diplomat between the Camarilla and the Sabbat. As America establishes itself as a country and Cainites follow, she travels widely, though she never relinquishes her claim on her territory in Gloucester, even as Boston becomes an established territory of the Sabbat.

1900s - The Giovanni arise in Boston. Bob makes friends with the local Giovanni and they provide mutual aid to each other against the Sabbat over the next century.

1900-1904: During the Giovanni Territory push in Boston, Big Swatta worked with Bob to contain Sabbat resistance.

1950 - Bob spends some time in NYC but only seems to speak to her own clan mates, and the Tremere

1988 - Bob attends the Toreador Grand Ball in Montreal. Here, the first clues to her dreams begin to fall into place as she realizes Thin Bloods are on the rise and a second inquisition is soon to follow.

1998 - The Great Prank is revealed; Dementation returns to the Clan.

1999 - Clan Gangrel declares themselves Unaligned. Bob says “I told you that you’d be first.”

1999 - Bob goes to Bangladesh to do her part. She tells her Clan this is proof of the Camarilla’s lies - the Antediluvians are real, and Cainites are completely unprepared and unable to deal with them. She is surprisingly unprophetic about the Red Star, and merely says “It will get worse before it gets better.” When asked what that means, she replies “Nothing,”

2009 - The Red Star fades, the clan feels “The Jolt”. Bob is disoriented, and worried about her Clan.

2010 - Malkavians begin to experience an event they will later refer to as ‘The Quiet’; like a blindfold, it greatly affects their ability to see The Strand of Fate. The Network goes entirely silent. Bob spends the next 10 years working to hold her clan together, as individuals and a group, as they fight through the despair brought on by the sudden absence of their clan in their minds. TIES SOUGHT - Bob was attempting a physical census of the clan, so even if they only met once, this is a good tie!

2010 - Grace drops the identity of Diana Grant and joins the Anarchs. The connection between Grace and Bob is revealed.

2011 - October 31 - November 1: The Beckoning - Electrifies Bob as finally “Nothing” has come to pass and after more than 500 years of ranting and raving and railing against the Camarilla, she has proof she was right. Bob formulates her theory that The Beckoning is a result of the Camarilla’s denial of the ancients, made manifest in reality.

2013 - 2016 The Sabbat leave Boston. Bob defends her personal domain but largely ignores the other sects laying claim to parts of the city. She agrees to give equal aid to all signatories of the April Morning Accords, recognizing Firstlight as their common enemy.

2015 - Bob visits Eugene, OR to intervene in a political situation involving the Malkavian Primogen and his unsanctioned childe. She successfully negotiates for the childe's life, and both are banished by Prince Elijah Smith.

2017 - the Network gradually begins to return, but is inconsistent - some Malkavians feel the benefits of the constant connection while others are only partially 'tuned in'. Bob is one of the ones who is tuned in.

2019 - No Malkavian comes forward at Conclave to present this so-called Kiasyd clan.

Since the Camarilla was merely a coterie, Bob has fought against it and predicted that it would be a great source of tragedy and the downfall of many Cainites. She tried to keep Clan Malkavian out of it, unsuccessfully. And now her prediction has come to pass. The combined might of the mass disbelief in the Antediluvians that the Camarilla ideology has propagated has created The Beckoning. Bob strives to help her clan before she, too, is lost. It's not to late too prepare for the future...or is it?

Bob believes that Malkav and Arikel, the Toreador founder, were twins. Arikel, who was a Great Seer and clairvoyant, was commanded by Caine to create a mural showing him the future of Cainites. Arikel's vision was so bleak and terrible it enraged Caine, who cursed Arikel to be distracted by that which she saw as beautiful (the Toreador Clan curse).

Malkav also saw the mural and was overtaken by the Truth. Malkav was enraged when Caine cursed Arikel, and Malkav vowed to take on the mantle of Seer from the crippled Arikel and her clan, and sought to understand whether Arikel’s vision was what WILL happen or what MAY happen to The visions and uncertainty drove Malkav to madness, and his Curse was passed to his childer.

Seeing the madness overtake Malkav, Arikel founded the Path of Humanity, to guard Malkav and Cainites against the Beast. Arikel subverted Cain’s curse by using art to speak truth to power, and worked in tandem with her shattered twin Malkav guide Cainites to a better future. They passed their gifts and curses to their Clans so that the Great Work would continue, even after the antediluvians had faded to half-forgotten myths.

Bob is an inheritor of the Great Work, as are all Malkavians and Toreadors. Bob is also a Seer, a true clairvoyant who knows - has ALWAYS known - that the Camarilla and its insistence on that the Antediluvians are a myth was the greatest existential threat to Kindred to arise from within. She’s been vocally, passionately in opposition to the Camarilla since its founding, and though it’s taken nearly two centuries, now all the world can see that she was right. The Beckoning is the physical manifestation of the combined belief of the Kindred who have bought into the “Antediluvians as myth” ideology.

The Sabbat has gone and now news sects rise in opposition to the Camarilla - it is time for the Ivory Tower to fall and for all Malkavians to join together in examining the future. Is it too late to save themselves and their brothers? Has Arikel’s Terrible Vision finally come to pass? Or has it already come to pass and now the future is fully unknown? Bob knows that her nights are limited and that the future belongs to the thin blood, but she can’t leave until she makes her clan understand that they are strongest together, that their destiny belongs only to themselves. Can she do that before she, too, is disbelieved out of existence?