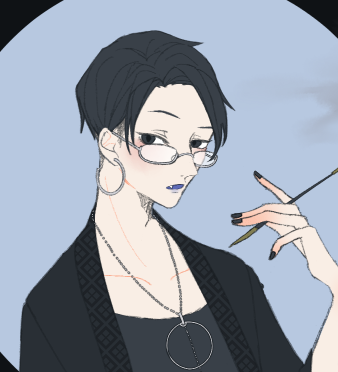 Keshet has a beautiful face that could be any gender and is hard to place an age to - maybe late 20s - and is 5'9" with a mostly androgynous figure aside from a pronounced bust. They are very pale-skinned, with dark, haunted eyes behind black-framed glasses, and black hair in a short sidesweep-and-undercut with designs cut into the short section. They wear black cat's-eye glasses, and either perfectly fitted black suits or black skinny jeans with a sweater or biker jacket, sometimes set off with a top in white or jewel tones, and at formal events usually wear heavily embroidered jackets, never gowns. They favor goth makeup, and often smell of an especially heady blend of incense based around frankincense, myrrh, and cinnamon. [Appearance Focus (Vicissitude mod), clothing is nearly always Stylish and Artisan or better.] They sometimes wear backless tops to show off an intricate full-back tattoo of the Kabbalistic Tree of Life overlaid on a more literal tree that has the roots up, rather than down. [The piece is a Masterwork done by Virgil Vendicimo.]

If you last met them prior to the March 2021 art show in NYC, this is a totally new appearance, though they look as if they're related to the person you'd remember. The tattoo is new as of the same time.

Kindred society knows Keshet as an extremely talented embroiderer, medium, and oracle. The long-term ghoul and student of Zalman-Rose Makhshayfeh (then Melamed), they ended up rather suddenly being Embraced Malkavian instead, apparently with the blessings of House Melamed, not long before Zalman-Rose left the Melameds as well. They have proven startlingly effective for how little time has passed since their Embrace, and are developing a reputation as a disturbingly accurate prophet, though they are still quite obviously struggling with their Clan's curse/blessing and the Beast.

Having been affiliated with the Library of the Sixth Worthy for several decades through Zalman-Rose, and with their sire's and House's expertise to consult as well as their own powerful insight, they are now more than qualified as a member in their own right. They're also tech savvy enough that they continue to work with and the, using the digital alias "0r4cl3".