Luken arrived on the scene shortly after the quiet/beckoning. Typically staying in Baton Rouge, LA but sometimes is struck with wonderlust and/or a quest that requires a life on the road. Tends to be detached, analytical, and aloof but oddly has bursts of levity, sarcasm, and sentimentality to those who amuse. Communication and observation are two main aspects of importance. Founded 'that's a lark' communication for secure difficult to trace message for the discerning client, offering misleading, cryptic, emotion laden snail mail.

Passions include indifference, paradoxes, word plays, and quantifying objective reality for errors (known as mysteries to most people).

A fresh face and entrepreneur who enjoys encouraging challenging discourse on what exactly is 'real'. Both actively encouraging of protective political agendas but deeply apolitical.

(If you are curious of more of Luken's story here is a more narrative version: a possible story. Please feel free to email me if you would like a tie.) 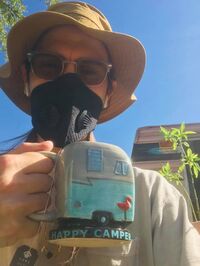 Photoshop is amazing to give a nice warm sunny background to nomad life
Retrieved from "https://wiki2020.modernenigmasociety.org/index.php?title=Luken_Lewis&oldid=16570"
Categories: