Category:House of the Griffon

The House of the Griffon is a Ventrue house that was formed by Luminary Ventrue Grifo Martel just after the formation of the Camarilla,
loosely patterned off of the French monarchs. The house words are: “Virtue, Power, Chivalry” and they uphold the several classic Ventrue
traditions and wholly support the Camarilla and it’s 6 traditions. 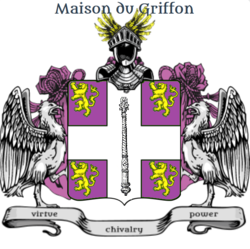 The house ethics are:

Grifo created the house in 1550 AD in an effort to organize his lineage without tyrannical control, which he viewed as a violation of the 2nd Tradition.
Grifo's childer are Kindred in their own rights, many of whom are Elders, so Grifo barking commands and “demanding tribute” to them would accomplish very little.
Instead, he encouraged his childer and grandchilder to branch out into other cities and set up their own city branches, known inside the House as a ‘Chapterhouse of <City>’.
Each individual city would have a “chapterhouse”, also called a “rookerie” by some, patterned after a chessboard.
The head of a chapterhouse is called a “King” while the second in command is known as a “Queen”.

Heads of local house security are called “Rooks” and those who manipulate mortals and track house boons are known as “Bishops”.
“Knights” are spies, saboteurs, and warriors of the house, those who go out into danger and head it off and/or take it out.
Mortal associates (i.e. Ghouls and retainers) and those of lesser blood and fledglings of the house and clan, are known as “Pawns” and that is not a misnaming.
Grifo further summarized the tenants, ethics, and structure of the house as “The Ancien Regime” after the old French monarchical system he was so used to.
Modern day members of the Chapterhouses tend to change the wording around or use modern terms, but they all know the original credo by heart.

House Leader: responsible for the overall direction of the House at Large and its goals; each House Leader usually creates their own title while they stay in off.
Grifo referred to himself as the “Sun King” of the house back when he was in this position, with the understanding that each King was over his own chapterhouse (as per the 2nd Tradition).
When <insert character name here> was House Leader he referred to himself as <insert chosen title here>.

Kings are not to be Princes of a Domain, but nothing prevents them from doing so. Kings are encouraged to be Praetors and or Strategos, clan-wide position holders, as all (Camarilla) Ventrue are “cousins” and Ventrue “are their brother’s keeper”.

Grifo formed the House proper a few decades after the Convention of Thorns, inspired by de Corazon and the Camarilla both.
Taking a cue from his own name, Grifo, which is Spanish for “Griffon” and the Griffon having long become a heraldic symbol for “Divine Power and Guardians of the Divine”,
Grifo lent his name to the house and thus “The House of the Griffon” was born. Over the course of the next decade, he and his direct childer, full Elders in their own right,
hammered out the rest of the Ethics and organization of the house, as listed above.
Grifo also noted that Kings and Queens are not forbidden from claiming a Praxis, though he did warn against it.
"Princes are pulled in various directions by both the divine and the base”, he dryly noted, “by both the high clans and the low."
"Boons can also force one into compromising positions. It’s better to avoid such entanglements,” he continued, “and avoid bringing the house into disrepute.”
He does encourage members of the House to push for Primogen seats and/or Harpy seats however. “The outside entanglements are much less," he would opine.
"and you can leverage members of your local house to assist you. Further, never leave the Clan (as in the Ventrue as a whole) without a voice on a Primogen Council,” Grifo would say.
"It's a far better to be a Kingmaker than a King, at least in relation to a Praxis."

Having set up a decentralized house, Grifo realized he would need to create a method for house leaders to select a new overall house leader.
Grifo suggested that in the event of the head of the house being unable to carry out their duties for a full calendar year, such as in the case of torpor or final death, each Chapterhouse head
the “King” position of the Chapterhouse) would select their choice of house leader instead of the usual games of brinkmanship that Camarilla elders usually engage in.
These votes can go in any direction (and yes, the Kings can vote for themselves) and major boons or higher can and are expected to be freely exchanged (or called in) to sway a King’s vote.

Grifo led the house for two centuries until Torpor began to claim him. He had set the succession rules up agreed to and issued to the house at large,
Grifo celebrated his 1,000 year death night in Frankfurt while Julia was back on the Throne as Prince of Frankfurt.
Grifo had capped off the night with a prepared a crypt and went into Torpor in Frankfurt and <insert new house head here> began his rule of the house.

In 1944, all communications out of the Frankfurt Chapterhouse, which was being savaged by Allied bombing in World War 2, was lost and no one heard from Grifo ever again.
Around the same time, The Second Anarch revolt began to fire up along the west coast of the US. However, it largely left the house untouched; the house has been focused in Western Europe
and the Eastern half of the United States for centuries. A few warehouses belonging to a Chapterhouse were set alight, but they were largely empty after this the
house never bothered to deal in the West Coast of the US ever again.

The House and the Brave New World:


In 2016, House founder Grifo was found by a coterie of his descendants in his forgotten crypt in Frankfurt, long hidden in the earth and covered by rubble.
Being fed enough vitae, Grifo was awoken and he spent the next 6 months re-acclimating himself to the modern world, stunned his house in shambles.
With the beckoning having claimed a number of allies and associates, Grifo is lost, but his house, however broken it may be these nights, still stands.
And that will be enough.

Other members and their positions:
Kings:

Pages in category "House of the Griffon"

The following 8 pages are in this category, out of 8 total.