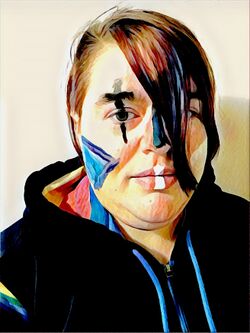 Switch is a cocky young man nearly always seen carrying a laptop and wearing some sort of rainbow accessory, in addition to his omnipresent cane. He is loud, passionate, and often argumentative, but he never seems to take the arguments personally, approaching them as an opportunity to debate and discuss principals, rather than a true argument.

Although perfectly willing to work across the sects, Switch has taken the Second Inquisition as the opportunity to work on forging the Anarchs into a sect in their own right. His passion for that shines through even when he is otherwise willing to work for anyone who will pay him to clean up their Masquerade breaches, and rare is the time when he doesn't take the opportunity to convince someone to join the Movement.

He is a vocal supporter of what he calls "Building a Better Movement", and you can hear the capitalization when he says it. He wants to bring vampire society into the new millennium, and believes that now is the time to re-forge Kindred society. He wants to make a vampire society that reflects the government and morals of modern humanity, and welcomes vampires of all stripes as long as they are willing to adjust to a new world, where technology reigns, and hiding in the shadows is harder than hiding in plain sight.