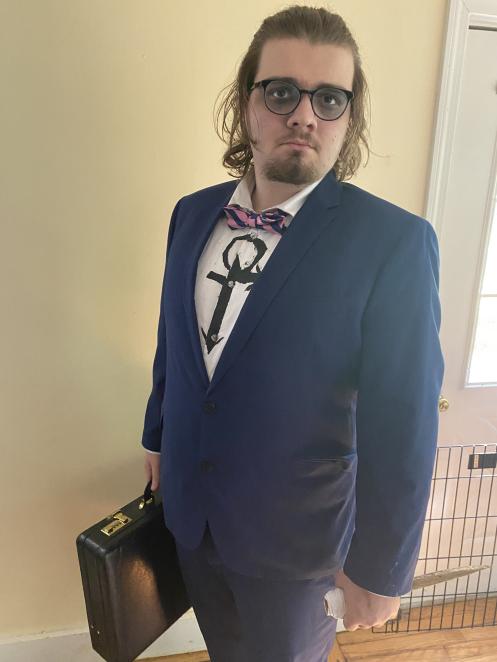 This Kindred is always sharply dressed in a blue suit with matching glasses, and when representing the Anarch movement the undershirt has the Anarch logo painted on it.

Personality wise he is a stubborn Anarch idealist/Constructionist who views all kindred equally regardless of clan, or generation. York avoids needless conflict, and if you can get past his stern exterior he has a soft heart that truly cares for his fellow kindred

1888 Born
1918 Drafted into ww1
1918 Embraced
1918 with the help of the Anarch railroad moved to new england and began work for the Camerilla
1927 After cementing their place within the Tower of NYC York began to Support the Anarch Railroad
2011 York left the Camerilla to join the newly freed Anarch movement in Boston.
2013 York openly welcomed, and helped former Sabbat who seeked to join the Anarchs. Telling other Anarchs if we ignore the plight of fellow Kindred we are no better than the Tower we left.
2014 fully initiated into the anarchs after being vouched for by Sinclair
2016 Helped cover up the celebration of Liberty day
2018 Sought the help of the column in learning how to make the most of modern technology.
2018 pt 2 After hearing of Iris Bennett York helped lobby for thin blood rights among the local Anarchs.
2019 York decided to work directly as an Engineer for the Anarch Railroad

York was born in San Francisco where he worked as a detective for the SF PD until he was called to service by the draft. He was embraced before he could be deployed, but with the draft still looking for him he had no choice but to flee San Francisco with the help of the Anarch Railroad. He was moved to NYC where he established himself as an investigator, and protector of the masquerade for the Camerilla while simultaneously aiding the Anarch Railroad in the region. Like most Brujah York left the tower during the 2011 Brujah exodus, and decided to rebuild themselves in the budding Anarch community in the Boston Area. In more recent nights York when is not working as an engineer for the Railroad he spends his time running a pub for his fellow Anarchs, or attending meetings with the Column to try come to grips with the ever evolving technology. He is incredibly proud of his new found psuedo computer literacy!

"York always wears his true Allegiance on his back whats ever that means"-Random Anarch
" His beast enjoys his new found freedom much more than he does. He's just a rabid dog with out the structure of the Tower"- Former friend in the Camerilla
Edit Rumors: Add your own!

"Worst case if this meeting with the elders goes south I won't have to wash their blood off my suit!... Cus you know blue blood... blue suit... Its an allegory... For fucks sake just forget I said anything"