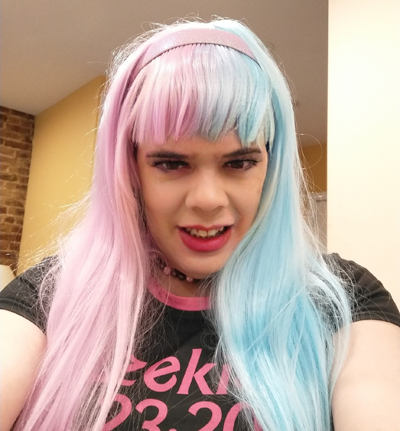 A very striking raver - usually dressed in baggy cargo pants, and a tight crop top or ringer t-shirt. She usually has white goggles with pink lenses sitting on her forehead like a hairband. She tends to wear heavy smokey eyeshadow and dark eyeliner. On her wrists and forearms are a ridiculous number of bead bracelets in all sorts of color patterns.
Hair dyed pink and baby blue.
Other techno enthusiasts will recognize her as an internationally known DJ. (Fame 1)
She is extremely friendly and outgoing, very street-smart, but almost recklessly unfiltered in her speech and behavior. She always carries small baubles and candies to give out to people wherever she goes.

Born in Tel Aviv to an Arab Father and a Jewish Mother, she left Israel at age 20 and changed her name, as well as other aspects of her identity, then began travelling around the world to various Trance/Rave parties.
Chrysalized at a full moon party in Goa, India, at age 23. She started taking up DJing and became fairly well renowned among the minimal techno and trance scenes, though she's also been known to spin goth, industrial or house if the mood strikes her.
Made NYC her home base at age 25. Aided Baron Klaus in the raid on Goblin Town and the subsequent takeover of the NYC Freehold. She became very close to the Baron and serves as The Tyrant's Voice (Bard) to this day.