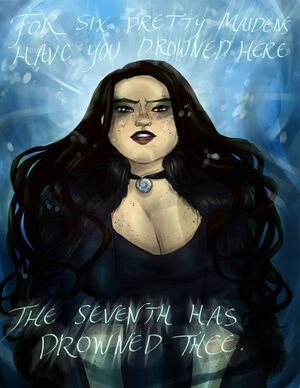 Rowan and one of their favorite songs.

Rowan looks like a quintessential selkie, short and soft of build, with a youthful face, dark hair, black eyes, and a freckled complexion. A young nonbinary person of mixed ethnicity, they wear their hair past hip-length and typically dress in black and in varying configurations of gendered attire, usually with something of a gothic, piratical streak. They're never seen without their black seal fur cape. There's something about their face that seems innocent and unsuspecting, even though their Unseelie nature says otherwise.

To those who knew their mother, Rowan looks like a younger version of her, albeit with a different demeanor and fashion sense.

Rowan Raith is a selkie of many hats. They sing, both in live gigs and on moderately-sized Internet platforms, they moonlight as a professional merperson in warmer months, and it's said they've been found engaging in some sort of pirate performance in another part of the country. They live in New York, but they don't seem as attached to the place as they are to its proximity to the sea. While some say Rowan is a romantic, and they certainly seem intense and passionate when they aren't existing in a state of languorous melancholy, they haven't made any such relationships public. For a performer, there sure is a lot they don't seem to share. Maybe it's the burden of their mother's Seelie legacy, and the need to run away from it?

[Feel free to contribute your own!]
Edit Rumors: Add your own!

"Come away, o human child! To the water and the wild with a faery, hand in hand. For the world's more full of weeping than you will ever understand." - W. B. Yeats, The Stolen Child

[Feel free to contribute your own!]
Edit Quotes: Add your own!