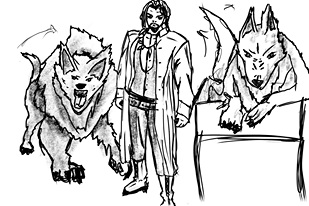 Mr. Church is an Animal Breeder and Veterinarian. He has always had an affinity with animals and a passion for breeding them to be stronger, smarter, and fiercer.

He grew up in the Bayou of Louisiana to an upper class family. He didn't care about the politics of his family but he listened and learned as he matured. When he was 15 he got caught running the largest and most gruesome animal fighting ring Louisiana has ever seen. His father wanted him to learn discipline and respect so he was sent to Louisiana's Finest Military Academy for Young Men. It was there that Virgil learned about building a New Persona. He branded himself Mr. Church and did his best to stay out of the spotlight. He quietly studied and received his Veterinary License in 1852.
Mr. Church loves new animals and the deadlier the better. While on an expedition for the Chupacabra in southern Mexico he caught the attention of a Vampire. After a long game of cat and mouse Mr. Church was caught and tortured. He left the jungle a year later as a babe in the woods.
Mr. Church had a difficult time as a Vampire. He eventually found himself in Detroit with a Traditional Camarilla Prince who believed Caitiff should be destroyed. Rayne Valarian vouched for Mr. Church and paid a significant boon to the Prince.
When dealing with Mortals Mr. Church uses the Alias Dr. Banner and is a Professor at the University of Arkansas Conway. He works at the Pyrotechnics building.

• Mr. Church wants to help make the IA relevant using his Retainers, Influence, and Himself by physically traveling.
• What happens when the Camarilla tries to destroy a member of the IA? How will different sects show hospitality towards the IA? How will the IA respond when another sect destroys one of its members?
• Death and Glory: If your character is unexpectedly killed, how would you want the ending to go? (Please include PVP and PVE endings) I want him to be remembered and referenced as a active member of the IA. He wants to create a system of power similar to Justicars in the Camarilla.
I want the final destruction to be known.

He always wears a claw necklace.

91 really stands for (Insane Asiago)
Edit Rumors: Add your own!