IC Courtesies will be posted upon creation by the PC Prince.

“"Near purged of Kindred during the 1930s, the Great Plains have only rebuilt their unliving population during the last three decades. Kansas City and St. Louis, in particular, have heavy vampiric populations. The large number of Kindred in Kansas City is at least understandable; given the wholesale slaughter of cattle that is one of the city's main industries. St. Louis, on the other hand, is more of a puzzle, particular since its Camarilla contingent is heavily tilted towards Brujah and Nosferatu."

- A World of Darkness: Second Edition, page 8.
Description: The Great St. Louis Metropolitan Area is home to several Camarilla vampires who reside in St. Louis City and County. The surrounding area is housed by Unaligned vampires of all stripes, relying on the Camarilla Hub for its continued growth and survival. The distinctly Italian section of the city called, The Hill, was granted to Clan Giovanni in 1904 during the World’s Fair and, while that clan is now a part of the IA, The Hill remains gifted to Clan Giovanni alone. 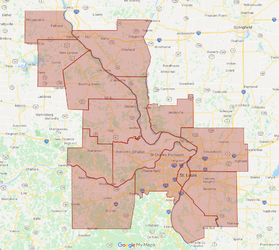 Description
Ever since it became a Camarilla Domain in 1811, St. Louis has served to show that adversity breeds excellence. The Ivory Tower’s influence can be felt over the entirety of the Greater St. Louis Metropolitan Area, home to nearly 3 million residents sprawled across nearly 8,500 square miles of adjacent cities.

Storyteller Notes: This is a heavy CvE and Political CVC Heavy game. The citizenry of St. Louis gather on the first Saturday of the month to socialize, play politics, and otherwise share in the living of their unlives.

Storyteller Notes
● Downtimes will be accepted no later than Midnight on the Wednesday prior to a scheduled Saturday game for their effects to be counted towards the upcoming game session. Anything submitted after that cut off will count towards the next month's downtimes.
● A minimum notice of forty-eight (48) hours notification is requested for traveling players. Please send your sheet and all approvals to stl.vst.cai@gmail.com. Any who do not submit before hand run risk of being denied entry at check-in and will be offered an NPC to play instead.
● A player must have a current full or trial membership to sign in and enter play.
● The character sheet must be on the database with a full XP log and CCDs are recommended.
● Any character created the day of game, must utilize only low approval levels and will be required to have uploaded their character to the database, (including written background, and CCD requirements) by the next game session.
● CCDs must be approved before the XP for such can be added to the sheet unless it is sent in with the initial character approval on the database.
● All character sheets must be updated every three months or they will be considered invalid and ineligible to be played and players could be subject to penalties per MES handbook.
● City Level Positions: Any position holder within the city (be it city or clan level) must be on this VSS. If a player from an outside VSS becomes a position holder, they will have 30 days to start the character transfer process with the ST staff, or their positional status becomes invalid.
● VST staff reserve the right to deny or narrate combat scenarios initiated less than 1 Hour prior to scheduled game wrap-up.
● Online Scenes - Online scenes which lead to combat scenarios between other PCs or NPCs will result in the PCs being time frozen until a common time online can be agreed upon by all Players and Staff to run...if such an agreement cannot be reached between all parties the PCs will remain time frozen until the scene can be resolved in person the next game day all are in attendance.
● Any PC who is not a member of this VSS who wishes to spend downtime actions inside this VSS will be required to submit a full proxy via email to stl.vst.cai@gmail.com and (character sheet and time line of dates the PC is within the VSSs borders). The PC may also be subject to time freeze if any local downtimes conflict with their own.
● PCs located on this VSS will collect max monthly XP (8 per month / 12 per month on AGR) on the first of each month.
● Discord server can be utilized for downtime And online virtual play at request of VST. Please send email for a fresh link to the discord server.

IC Courtesies will be posted upon creation by the PC Prince.

The following 15 pages are in this category, out of 15 total.