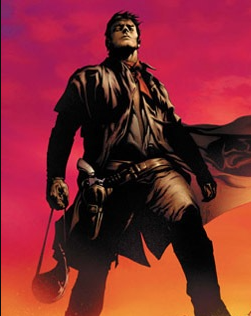 Kyle looks to be of vaguely greek descent but speaks with no discernible accent. His time in the Northeast has mostly removed it. He carries two pistols and has at least two other guns. His body is marked with several scars. His eyes are blue.

He is the Alpha of the pack The Sentinels, a Guardian focused pack. The pack is dedicated to Raccoon.

Aleksey "Aleks" Volkov deeded First In, Last Out. Get of Fenris, Fostern

4/XX/2012 - He fights in the backline with a sniper rifle, doing his best to pick off weak enemies.

8/9/2014 - Kyle arrives at the Sept of Seven Hills to try and help find missing BF kinfolk. Instead, he has to help escort the Caern Seed out as The Weaver Attacks.

3/10/2017 - Formally binds himself to the Sept of the Lonely Mountain and volunteers as a Guardian.

Kyle is a kinfolk who is unafraid to join the fight. He is constantly calculating how best to deal with any issues in front of him.

He is protective of all kinfolk, seeing the idea of being part of the Garou Nation as a win but the lack of laws and regulations on it as a major flaw.

He has also shown a bizarre amount of effort to defend the Telos, passively and actively involving them in Sept affairs.

Kyle became the Alpha of the Guardian Pack, The Sentinels, upon joining it. He actively works with his pack mates to organize and watch over the Bawn.

Minor note: Spyros either descends from the greek word for basket or the latin word for Spirit

"Kyle is am smartings leader. Knows good how am to balance our pack. Is goods listenings, is goods plannings. Never am is in pack before, but am is happy be followings Kyle." - Aleksey "Aleks" Volkov

"Do not underestimate this kinfolk. He is a capable pack leader, and will be a leader for change within the Tribe." - Quinn Nomikos
Edit Quotes: Add your own!