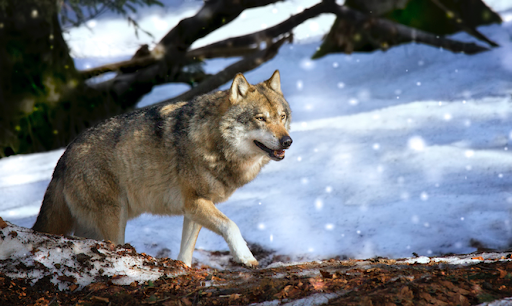 2018: Was driven off from his pack by a younger wolf

2019: Attended the formation of the Gaian Alliance at the Crescent Moon

2021 July: Went to Erebus with Ember and brought back the words of Cerberus.

"I know my words will not be heard, but still I will say them. I and a Telos called Ember traveled to Erebus to seek how to undo what the weaver has done.

"Erebus is under siege or will be soon. A force moves to remove it, to change its nature. Even those of the Wyrm that wish to be redeemed are not being given entry. If you wish to speak to the Lady, then the Counselors of the Nation will need to go.

"Charyss might be able to fix the Taint of the Weaver but she is not letting any enter now. Cerberus also gave us a message to pass. 'Tell those of the Telos to heed the signs to come and to make their choice for a future, lest they fall to a new foe and repeat their mistakes of the past.'

"Cerberus allowed one more question. I asked, what led to the warning being given and Ember asked about how the taint came. I believe his answers were about the taint and the Weaver.

"Cerberus asked 'Would not absolute balance be a static state?'

"I said, 'For a time, but in nature a wolf in balance is not a rabbit in balance. Nature grows and stays and dies in the cycle. Change is part of balance?'

"Ember asked most of the questions about this and he had one more thing to say to her, which I believe will affect all Telos. 'Those questions and efforts are noble goals but we need you for something bigger. No, that question will not be answered here.'

"Beyond this, I report the loss of three Black Spiral Dancers, one by Cerberus's fangs and two by our and the guard's hands. They were left at Cerberus's feet, to be cleansed in her Silver.

"The Weaver's hold with its Taint is broken. The Gaians went to Pangea to fix it and now the Circle can cleanse it. Sense the Balance can find it. And the group that went to seek Cockroach came back heavily corrupted.

"I have done my duty to Gaia and leave you this report."

2021 August: Fell at the Planting of the Unnamed Sept (will update once its named)

Tranquil Fury was the leader of a small wolf pack. Records (not that he cares) indicates his parentage is probably from the Stargazers, but this was not something he knew. He was simply a wolf.

He took command of his pack when he was a young wolf and lived as its alpha for 6 years until a younger wolf pushed him out. He was Bitten shortly after, probably because his time was done. Few wolves as old has he was in the wild would be able to survive easily.

However, with the Bite came something horrible; intelligence. Wolves have no word for War or Honor or Glory. His simple life was gone forever and he latched onto the reason for this war. That the Weaver and the Wyrm forced it. He was a wolf in his heart and so joined the Red Talons.