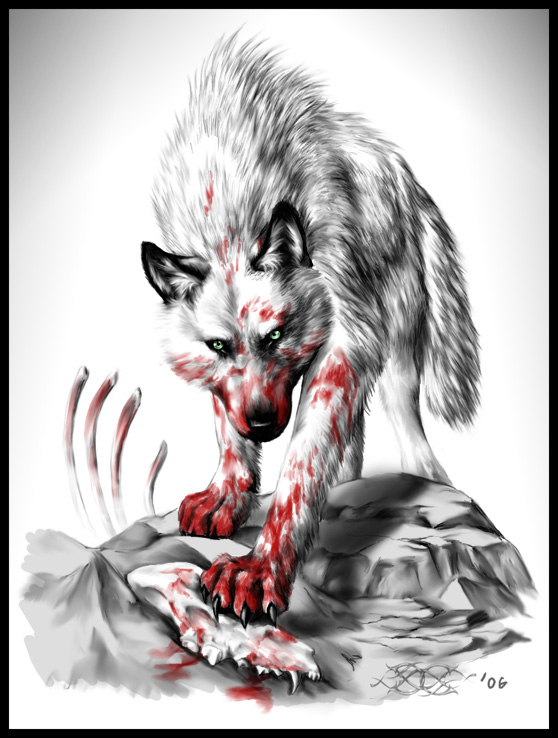 Rattles the Cage was born in the wild. He descends from a fine Garou lineage, but the War resulted in the loss of his last directly-related Garou cousins and anyone that was able to keep track of his Pack of Kinfolk. They were left to their own devices.

Absent Garou influence, they lived as wolves do. Eventually, they gained the attention of humans when their hunting territories overlapped the humans’ lands. When human hunters tracked the Pack to their dens and killed the majority of them, only those that were away survived. They were intelligent enough to avoid the bloodthirsty humans. Over time, all of the others either died of age or were killed when they preyed on livestock too often. Even he was wounded by the human weapons and traps, but he was able to evade them long enough that they lost interest.

He was left alone in the wilderness. He survived as best he could, avoiding the humans, preying on what he could bring down on his own. Too often, he found himself scavenging the animals killed on the smooth rock trails where the metal things carried the humans. It was a lonely existence.

Then he got caught. A human had laid a trap and he didn’t see it. But this human was different. It didn’t want to kill him. It put him in a place where other animals were kept. Animals of all sorts. They lived in squalor, tiny spaces wrapped in metal. He fed them food scraps and bits of dried things that tasted awful but at least kept them alive. The human led other humans into the place to show off his captives for the humans’ amusement. To make him growl and show his teeth, the human poked him with sticks. In time, the human didn’t need the sticks. He tried to rip the metal down with his claws. He tried to pull the metal down, pulling at it with his teeth. It was too strong.

But one night, something changed. The moon shone down on him as the man tormented him. Then, suddenly, he felt more anger than he had ever felt, and he was strong. He tore the metal open. As he ripped the metal, the man ran. It didn’t take him long to find the man, but he let the man escape only to hunt him down again. Each time, he took pieces of flesh out of the man, until eventually the man could no longer stand or even crawl. Only then did he tear out the man’s throat. Overtaken with Rage, he remembered little else. It was a confusing night, but he woke with a full belly, and it felt good.

More than that, something inside of him told him that he could walk with two legs. It was a strange sensation, to be mostly hairless and pink. He approached the cages – he now understood what the metal enclosures were called. The animals feared him more than they ever feared the human, even more than they feared him when he was a wolf. Still, he set them free from their captivity in this cruel, makeshift zoo.

And he did. Over and over

Quite some time passed before he learned that the humans were hunting him again, but this time they had good reason. He had given them dozens of reasons as he made it his business to track down and deliver vengeance on those that murdered his Pack. He found them. He tormented them. Eventually, he killed them. Once the Pack was avenged, he found new prey, hunting those that had no respect for nature and balance. He treated them the same as he treated those that killed his Pack. After all, it was the humans’ encroachment on the wilderness that caused them to hunt the Pack in the first place.

When the humans found him, there were dozens of them. He understood enough about them to know that if they found him as a wolf they would kill him. Instead, they found him in his homid form, and he was calm and compliant. Men beat him with sticks, then they took him. They chained him. They put him in cages. More men beat him with sticks. Still, he knew he couldn’t show anyone his true self, so he remained in his homid form, and he kept his Rage contained. The spirits, who he had learned to talk to and see, helped him from setting his inner Rage loose on those around him. They couldn’t contain all of it, not all of the time, but they kept him from losing control.

As he sat in their cages, he was told that he would wait to die at their hands. He knew he would need to get out before that happened. He bided his time until an opportunity came. In that time, the humans around him acted unpredictably. Of course, when he was pushed by others, he would occasionally lash out. But then, there were the times when his simple presence seemed to cause others to act like the caged animals that they were. It wasn’t long until others took notice. In time, he was isolated to keep everyone else tame.

In isolation, he was able to interact more freely with the spirits. It was the spirits that informed the others of his kind of his predicament. Soon, he was removed from that cage. He was taken somewhere where the cages weren’t surrounded in metal, but foam. And before long, he was gone from that cage as well.

His kind, known as Garou, manipulated the humans. Those manipulations set him free. The humans believe him to be dead, but that matters little to him. The Garou took him in and taught him their ways. They called him a Lost Cub, but reclaimed him. He was inducted into a Tribe. A Camp. A Faction. He participated. But they explained to him that staying close was a danger to all of them. So they sent him away. Sent him to a place where his homid face might not be known.