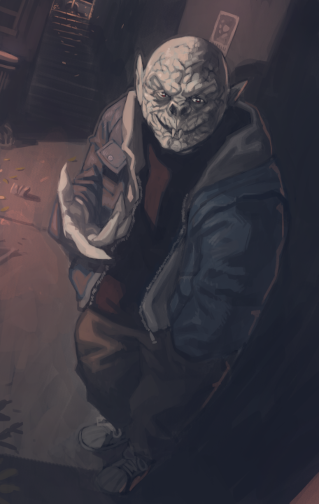 The quintessential Nosferatu, Pallid remembers little and cares less about the life he had before his Embrace. It's not unusual for the horrifically painful transformation that all Nosferatu undertake to leave broken minds as well as bodies, and while Pallid endured the change with his sanity more intact than many it expunged the past from his memories, leaving only vague impressions of the mid 19th century in the American northeast. Whatever qualities his Sire might have seen in him before the Embrace, after it he became a willing and useful tool of his Clan. Specializing in both clandestine information gathering and direct, brutal enforcement when necessary, Pallid earned the acknowledgement of his Elders. Pallid became well traveled as his Clan sent him to secure their interests, having visited Britain, France and most of the continental United States.